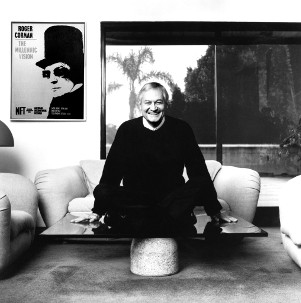 Roger is revered in the film industry for his ground-breaking work in the genres of horror, fantasy and science fiction. He has written, directed and produced hundreds of films during his career to date

Roger is the author of the bestselling, hilarious autobiography “How I Made a Hundred Movies in Hollywood and Never Lost a Dime”.

Corman was the youngest filmmaker to have a retrospective at the Cinémathèque Française, as well as the British Film Institute and the Museum of Modern Art. He was the co-founder of New World Pictures, a prolific multimedia company that helped to cement Fox as a major American television network, and is a long-time member of the Academy of Motion Picture Arts and Sciences.

In 2009, he was awarded an Honorary Academy Award for "for his rich engendering of films and filmmakers."

Roger and his wife Julie Corman formed New Horizons Pictures in 1983 after selling New World Productions the previous year. Producing some of the most beloved cult classics of their era, New World also proved to be a training facility for a generation of the greatest film talent of all time.

New Horizons in the last decade has partnered with SyFy, Sony, Netflix, and most recently Universal Pictures to create fast-paced, youth-oriented content for the next generation of film lovers.